We are halfway through the first week of the excavation with an excellent turnout of 20 of us on site overseen by Cathy and Lynn of AOC.  We are now focusing on two trenches, 70215 1C and 2B.  Cathy conducted a detailed tour of these trenches keeping us abreast of developments in all areas.

We are looking forward to the open day on Saturday where we will share the results of our activities to date with visitors and welcome more volunteers from the local community.  Our most exotic volunteer to date, Alison, has come from Malaysia and is holidaying on the Black Isle.  This project has a strong commitment towards training community volunteers with qualified archaeologists and experienced volunteers mentoring novices and the less experienced. 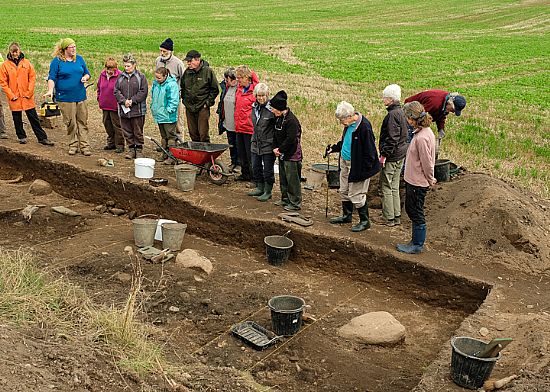 1C is the south facing trench tight up against the embankment below the field where we excavated earlier in the week looking for evidence of the 13th century castle site - the hunt for that castle continues.  A new word has been heard on site describing the time periods we are investigating at Tarradale ie between the Mesolithic and medieval – the mesoeval!

1C comprises four trenches with bulks between them.  Removing the top soil revealed large spreads of a black layer which supports the hypothesis that this was once an area of activity.  The question is when and what kind of activity?  Perhaps there were houses tucked into the bank or it was an area where folk were industrious and worked.  Like most of the Black Isle it is an intensively cultivated area therefore plough disturbance displacing such areas of activity from the surrounding fields or slippage from the top of the bank cannot be ruled out.  We could almost hear Kathy’s brain working as she looked into the trench visually analysing the revealed areas.

We have been carefully cleaning back the black layer.  All spoil from this area is being sieved – areas of brownish soil are dry sieved beside the trench but the black soil is being given a more thorough wet sieving by Linda and Jonie in a dedicated riddling area. 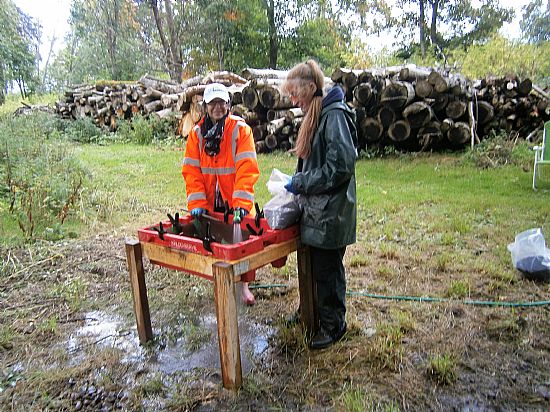 Wet sieving has the effect of “washing” any items that remain in the sieve after the soil has passed through helping to reveal any artefacts or items of potential interest within it – rather like the beneficial effect of a wash of rain on a recently ploughed field walking site.  This is demonstrated by the photograph of a black plastic rodent which inexplicably (I smell a rat!) turned up in the sieve.  Jonie’s screams of surprise were heard throughout the site.   Note the quartz appearing amongst other stone and debris.   We are collecting quartz which is examined closely for evidence of knapping as lower quality material might have been used for tools in areas such as this where flint does not occur naturally and is therefore less readily available. 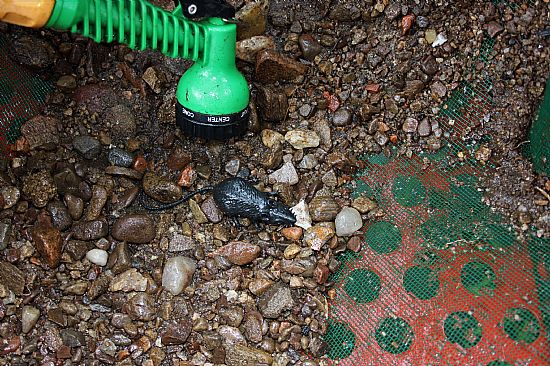 We are also separating and saving all fire cracked stones.  Small pieces of bone, ruminant tooth enamel, a good piece of medieval pot and a possible hammer stone have already turned up.

In the section at the East end of this trench Jonathon exposed an animal skull.   Some of us had recently participated in the Rosemarkie Cave excavation where a carefully placed and buried deer was discovered without its head – Steve Birch (who joins us next week on site) puzzled over what might have happened to it – could this be the answer?  Probably not as it looks more like a sheep! 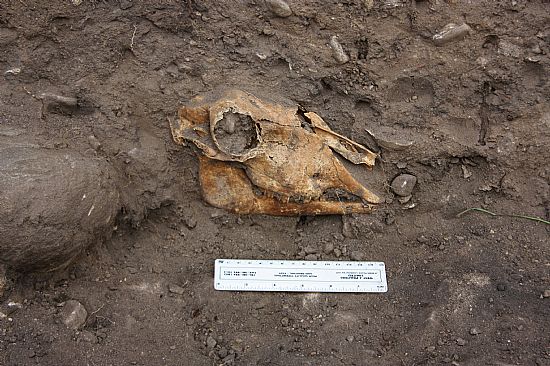 Excavation of an area rich in middens where we hope to answer the questions of shell midden activity has also commenced this week.  Currently these areas are being dry sieved only.  Additional shell middens will be opened next week.

The views from this trench are spectacular.  The area is rich in wildlife including seals and large flocks of geese with red kites and buzzards wheeling overhead.  No doubt this was equally attractive to folk in the past although the area would have appeared very different in pre-history with the sea much closer allowing the creatures whose shells fill the middens to be collected and eaten.  The discarded shells include periwinkles, whelks and oysters. 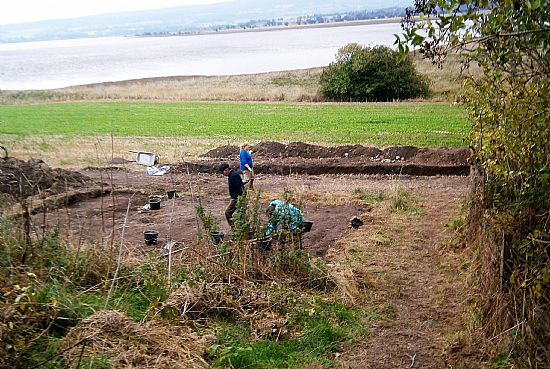 Trench 2B looking towards the Moray Firth (Karen Clarke)

Trowelling through the upper and lower plough soil has already revealed a medieval jug handle and I was pleased to discover an antler tine at the end of the day in an area close to the original test pit dug some years ago where charcoal was found.  Hopefully finds like these in the plough soil bode well for the deeper layers. 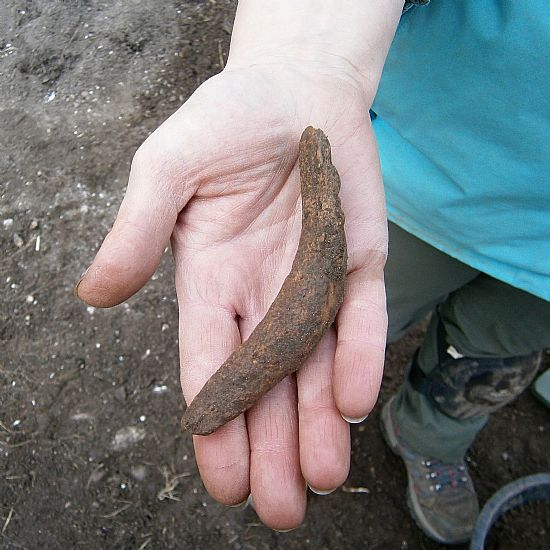