At last the snow has gone and the sun is shining.  Tarradale Through Time is beginning to wake from the winter ready for another busy season.  This year we are going to plan an old settlement which is shown on the 1788 estate map and in September we will excavate two more prehistoric sites. In preparation for the planning of the 1788 Tarradale settlement we have already done a couple of recces through the undergrowth.  The site lies within a wooded landscape which according to the map was all cultivated ground in 1788. 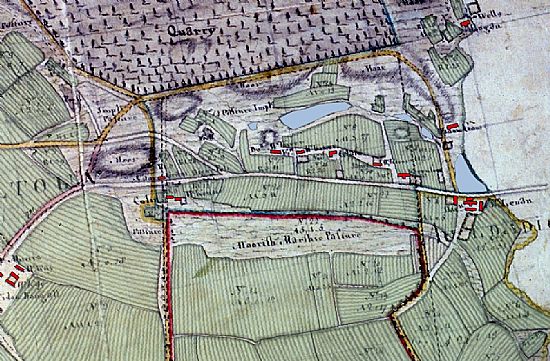 Fairly small irregular plots of rig and furrow are divided by unploughed ground, possibly pathways with a row of five or six buildings scattered along the centre of the settlement.  There are four small enclosed fields or kail yards.  Immediately to the south of the settlement a ditch is drawn and that is still there today.   Beyond the ditch the map identifies an area of moorland which today is a well cultivated field.  Interestingly beyond the moorland the rig and furrow fields are much larger than those beside the settlement. During the 1780s the landowners in Ross-shire were very involved in the modernising of farming practices so it is possible the ground to the south of the moorland already been ‘improved’.  The creation of large fields around a single farm house and ‘modern’ farm buildings was considered to be the way forward.  It allowed for commercial production of grain and cattle and sheep. 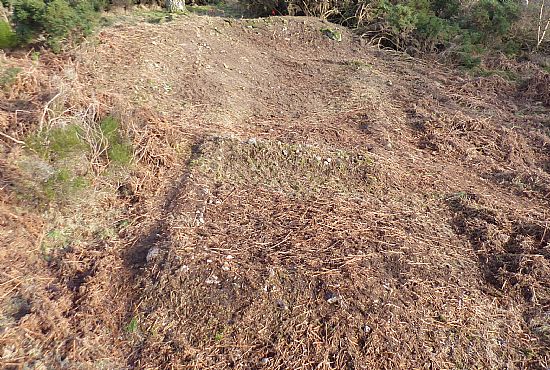 The large developing markets in England and central Scotland provided a large and hungry market for the produce of the Black Isle from the 1780s onwards.  The process of reorganisation meant that lots of poorer people were squeezed out of the old communally worked farms (fermtouns) and the buildings we see on the 1788 map represent the resettlement of these poorer people on to the marginal land. These tiny holdings were hopelessly uneconomic and within a couple of generations the yards and houses were all abandoned.  The map notes that 19 mealers had holdings to the north of Tarradale Mains and we appear to have the houses possibly belonging to 6 of the people named on the map.  There are 3 MacIvers, a Glass, a Grant and a McKenzie. 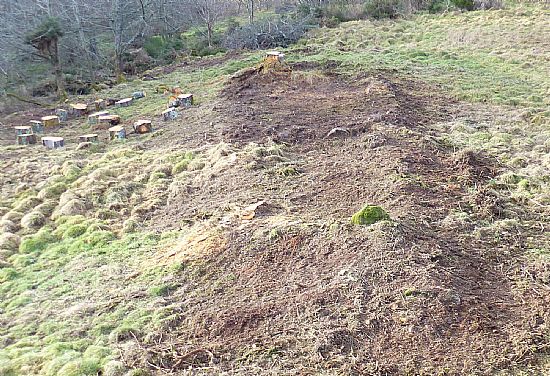 So knowing these houses had been abandoned for some time, we went into the whins and bracken to see what we could discover.  We quickly found our first house but not where we expected to see it and unexpectedly it is made up of three compartments. Equally unexpected was the nicely enclosed field or kail yard to the south of the building.  Add on another enclosure to the north and we had something we could not find on the map.  Continuing our search we found five more buildings at least one more with internal divisions.  Most of these buildings could be matched to the ones on the map although some are very degraded.  There are more field boundary banks and some very nice trackways.  To the north of the settlement there are a series of shallow ponds presently with trees growing in them.  There is a network of ditches between and leading from most of the ponds which suggest some kind of water management. 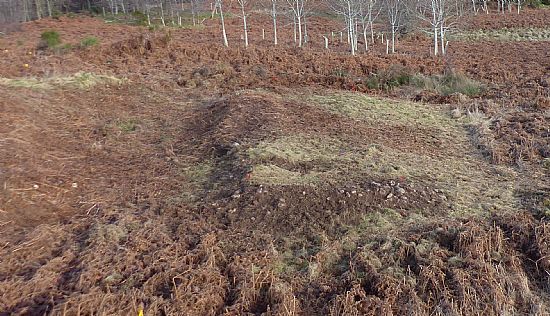 We have already begun to reduce the vegetation on the buildings so we can see the walls more clearly.  We will then plan the whole settlement.  It is hoped the planning will clarify some of the questions we have about the settlement.  We would like to know if the unexpected house is earlier or later than the other buildings, and is it the same or different in style.  Are there more kail yards? We have only found the one near the unexpected house and we should have found another three.  Can we trace the field systems and what is the purpose of the connecting ditches; are they just drainage or something more important?

We will be planning the site between 7th and 14th April.  If you would like to join us email tarradalethroughtime@gmail.com. See the Upcoming Events page for further information. 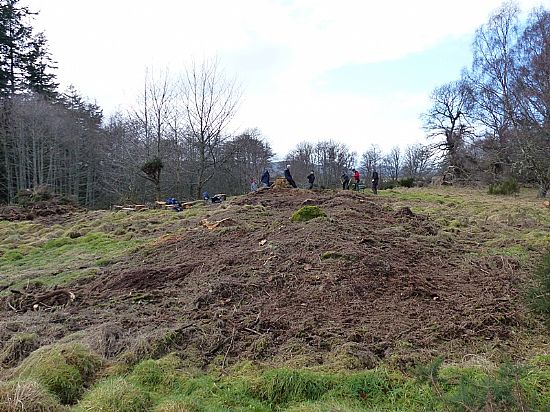