The Highs and Lows of a ‘Runner’ 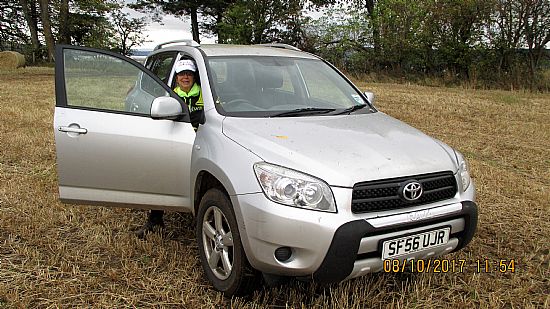 The other runner Anne on the other hand had lots more organising to do than I and without her expertise the excavation would have been very difficult.

This is the final blog for our 15 days of excavating at Tarradale Through Time.

Every day we have had an average of 20 diggers and the weather has also been kind to us during the excavation.

At the very beginning I was asked to keep a diary and do a video log of the day-to-day happenings on the site. Being on the dig every day is very interesting and I realise now what I have missed for the last 11 years having previously just dug at sites for 1 or 2 weeks, dipping in and out.

There is so much background preparation before and after, that has to be done. Approaching the farmer, securing the site, bringing in all the equipment, the list goes on and on. We have been very lucky to have a place where there is a room in the gate house with full facilities and a garage for storage. This was a great place to dig with views over the Beauly Firth and all its wildlife.

The volunteers, some of who are not able to excavate, were given wet-sieving (this is not an easy job ending up cold and wet outside but thankfully we also had use of the polytunnel) and recording finds and sorting.  The diggers spent their time in the trenches.

At the start of this excavation I really did not know what to expect.  We were all fresh and eager to proceed with excavation of the ‘Castle Site’ and the ‘Shell Middens’.  Cathy was our archaeologist on site for the first week and she did a tremendous job making sure all the diggers understood what was happening. Mary and Steve arrived for our second week of the excavation and put in a 110% effort explaining all procedures about the excavation. Steve gave us two lunch-time talks on the kind of finds we were likely to excavate.

Our first week started on 22 September when the mechanical digger removed the top soil of the 4 trenches within one area and 2 others on the eastern promontory.

There was great anticipation and expectation that the Castle Site would produce some evidence of occupation. The trench was approximately 32 m in length with two side branches.

After 2 days of digging and a lot of hard work nothing diagnostic was found; even just a ditch or post hole evidence would have been great.  This trench was abandoned and we moved on to our next 3 trenches at the bottom of the raised beach to find the middens.

Trench 1b did reveal a shoe buckle date 1750-1800? and other small finds.  This trench was also abandoned after 2 days.

Trench 1c looked very promising at first but as the soil was removed no real features were apparent. The hardest part of this trench was removing a large block of soil which took 8 people 2 hours. There was a sheep skull in the trench side to the E which was left in situ, this trench was then abandoned. 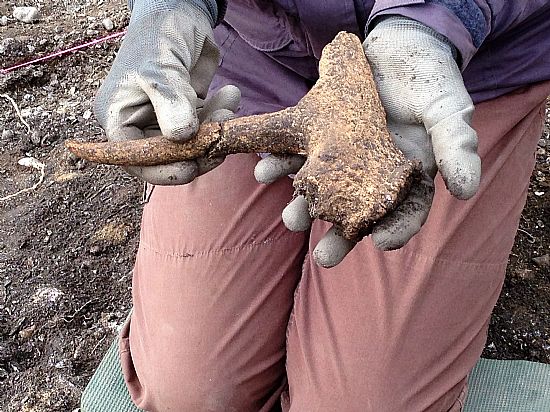 Tuesday came and now some of the team were moved to Trench 2b (Steve supervising) because last year two test pits had previously been excavated and looked very promising.  After being downhearted about the Castle Site the spirits of the whole team were lifted when Sue discovered an antler mattock. Other diggers also found parts of antlers and Anne is showing hers in the photo.  The people who lived on this site certainly enjoyed eating oysters and other types of molluscs, as many shells have been found. This trench is revealing something which will add to our understanding of the people who lived here 6,000 ago.

Others of the team moved to the Trench 2a (Mary supervising) on the eastern promontory. The day before some of the team had been test pitting on top of the raised beach to see if there were any concentrations of shells. The two trenches at the bottom of the hill had lots of fired broken shell as well and whole shells.  The difficulty here was the soil was very hard and filled with tree roots. The trenches on top of the hill produced shell middens and another trench showed post holes in the ground, the photo is of John and Brave. 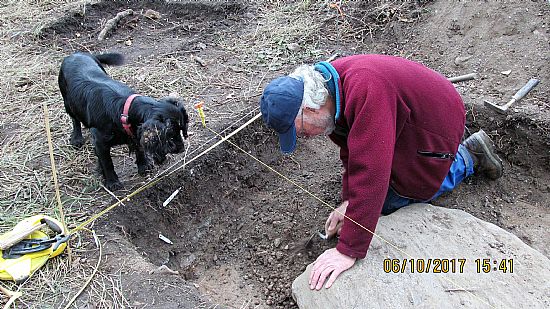 We have also had some fun e.g., I wanted to check to see if the metal detector was working and Pam said put it to her knee and hip, I did not expect it to give a loud signal but it did.  When videoing Sue she got muddled about which type of hand tool she was using. The hose pipe spout separating from the hose, flying about like a snake in the air making me very wet indeed. Pat our resident artist was advised to redraw one of her women in her sketch where her top half is more open to the fresh air. The plastic mouse put into one of the bags for washing.

The last day there has been a lot of moving of equipment, final trowelling, planning sections, washing tools. Using the 4x4 to collect over 100 bags from 2b for wet-sieving (this will take quite a while in the days to come) which the diggers had generated and the collection of many white tubs to go away for flotation.  There are, of course, lots of special finds and bulk samples to go to the specialists for analysis.

The team of volunteers come from all walks-of-life, some working others retired.  It has been a very social group with lots of cake/coffee and discussions at the breaks and lunchtimes.  I know it is this which also which makes a successful happy excavation.

At this point I must thank all the volunteers for their hard work as without you this excavation would not have happened.  Thank you also to all the others who contributed.