I haven't been on many archaeology digs but I suppose it's to be expected when you tell someone what you're doing they invariably ask - What did you find? or Did you find anything? Rarely, have I unearthed anything of great importance but often I've been given a tray to put in assorted finds which might include charcoal, bone or pottery depending on the era of the excavation. But what happens to these trays after they are handed in at the end of the day? Since I couldn't join the trowellers in the trenches, due to a hand operation a few weeks ago, I had opted to help with the finds so I was going to find out. 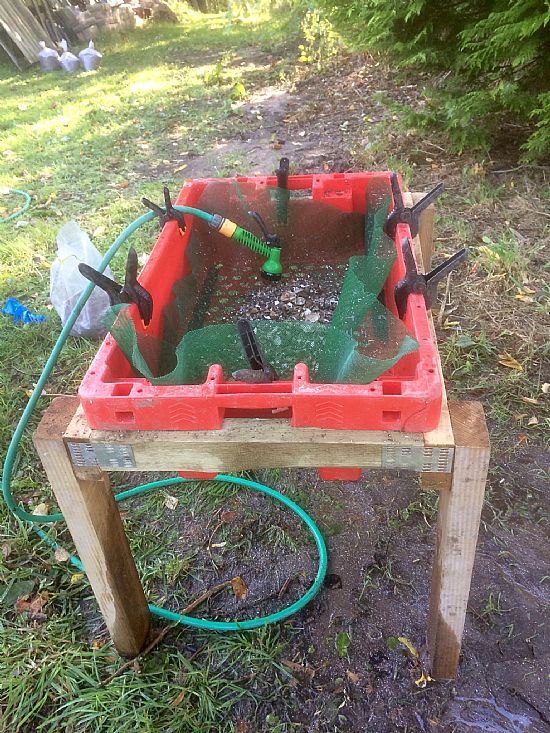 This week at Tarradale the focus is shell middens from the Mesolithic. Being the Mesolithic there is an expectation to find lithics i.e. pieces of flint or quartz that have been worked in order to be used as tools. Lithics can be very small so easily missed by the troweller in the trench so all their excess trowel material needs to be sieved and in order to make it easier to spot -wet sieved! Sounds fun eh? Donning my waterproof everything I headed to the wet sieving station situated away from the driveway amongst some shrubs and trees.

I am beginning to realise that archaeologists and their volunteers are nothing if not resourceful and my sieving machine proved this once again. Holes had been drilled in a discarded fish box which had then been mounted on a wooden stand. Inside a piece of fine mesh netting held in place with 6 large clips did the job of allowing the water and soil to pass through but to trap the bigger pieces, hopefully including lithics. I emptied half a bag of trowelled material from Mary's area and set to work with my high powered hose. Although, a few shiny things caught my eye and I stopped the hose to investigate further they were only fragments of shell with jagged edges. Oyster shells, cockle shells, mussels and winkles filled the bottom of the sieve but no lithics or any other proof of Mesolithic people having created the abundance of shell material being investigated on site. 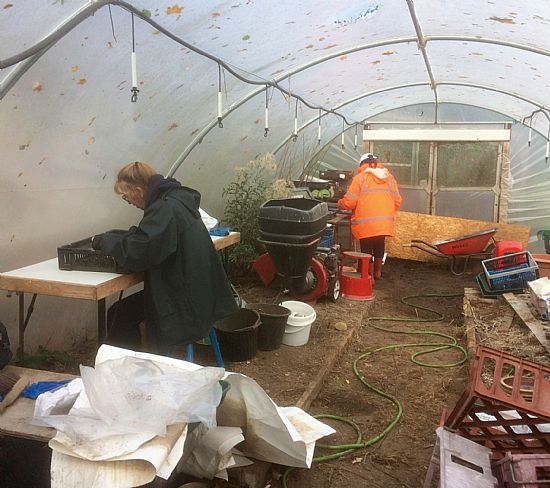 I tipped the washed material onto a tray lined with old newspaper and wrote the information about which trench it was from on a white garden label. On to the next batch, and then the next and the next - still nothing exciting. However, just like trowelling there is always the thought that a find will turn up in the next section. From time to time I wandered up to the polytent for more trays to put the washed material in and to have a chat with Linda, who was painstakingly going through some dry shell material looking for lithics and charcoal. 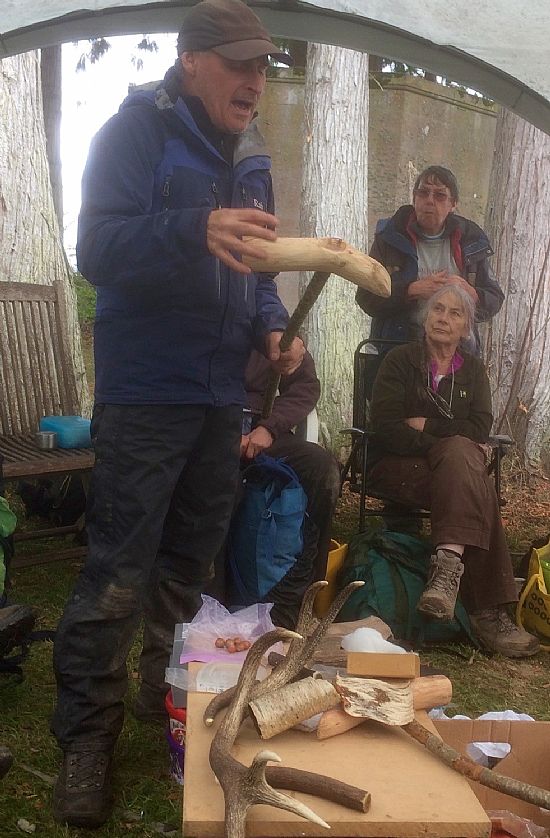 Lunch came and we all gathered under the gazebo in the garden to catch up with what we'd all been dong and to ask- have you found anything?

This lunchtime also included a wee talk from Steve mainly about how antlers and bone were used to make a variety of tools. This was extremely interesting and fascinating as Steve had created a few of the tools he was showing us using the type of flint tools that have been found from Mesolithic times. Jonie's husband Richard had made a wooden replica of the impressive antler mattock uncovered last week. Seeing this and hearing Steve describe how it may have been made certainly helped give it life and a small glimpse into the skills of Mesolithic people.

Lunch over it was back to washing my shell midden material. Still nothing to report. Before long Anne came to get me to work in the gatehouse and record the finds some people had been lucky enough to find. Now I was to find out what happens to that mixed back of finds I have handed in at the end of the day. Each tray was gone through, sorting the contents by material and discarding any that, like my shiny shell, had tricked the troweller into thinking it was something more important. A bag for each material is labelled with the information about it, entered on a card in the dig folder and a smaller duplicate card put inside the bag. Now the bag is ready to be sent for the relevant analysis.

My day working on the finds came to an end. I've certainly learned a lot and am I dispondant at not finding anything sieving? - not at all. I'm back there tomorrow and who knows what's waiting in those unopened bags.