Day 8 was not only the Dig Open Day with over 100 visitors - see pics here - but it was also a great day for progress in Trench 2B. Here a smaller test trench had been put in 2 years ago and we uncovered shell midden and a stone setting. Charcoal and a piece of antler tine was later dated to the Mesolithic period (c. 6500-6000 BC).

In the morning Sue uncovered a piece of worked antler with a hole bored or drilled right through it. This was most likely used as the head of a mattock or axe. 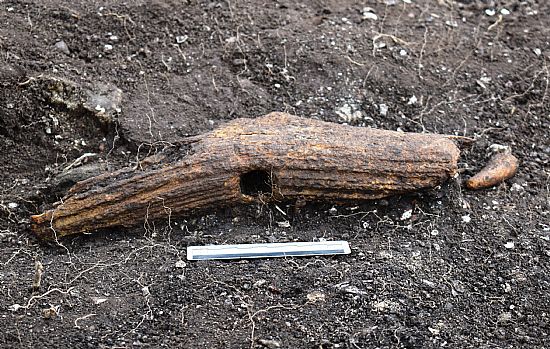 Sue describes the find in the video below prior to recording and uplift. In the second video Cathy says more about the mattock and the trench to a group of visitors being shown round on the open day.

The second find typically came right at the end of the day. I was just finishing cleaning back in my part of the trench when I uncovered what I took to be a large piece of degraded bone. On removal however it proved to be the probable base of a large antler. Like Sue's worked piece, this was from a large animal - conceivably elk rather than deer.

Cleaning around the area revealed a further antler or tine in situ. It was decided to clean, record and remove this artefact then and there rather than risk damage by leaving it over the weekend. Cathy and I excavated further to reveal two antlers without tines and what appeared to be a piece of skull. The condition was fairly poor and there were a number of breaks, but it seemed to have been deposited largely complete and it was clearly not from same animal as the antler base.

It was impossible to remove the item whole, but we did manage to uplift it successfully in several large chunks. Although it could prove to be much more recent, we are hoping for Mesolithic dates. 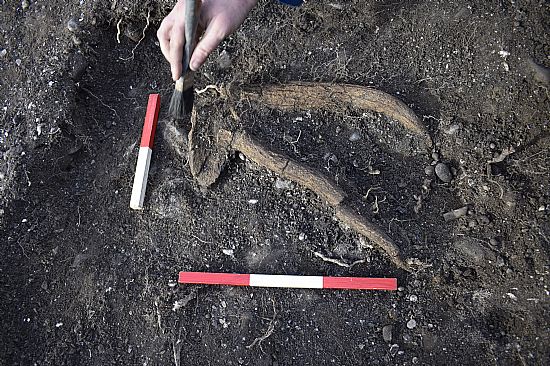 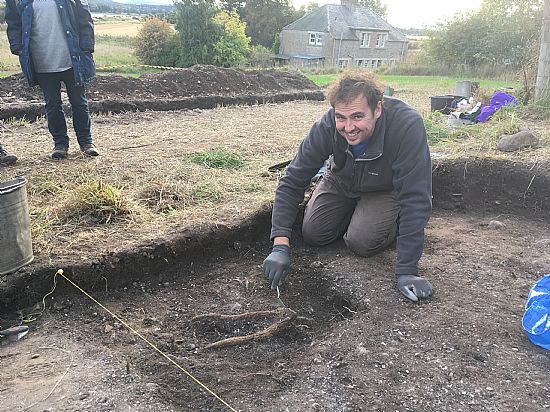